Ekaterina Alexandrova: «The loss to Kontaveit is very painful, but I won’t make it a drama»

Aslan Karatsev: «I know what to expect from Cilic, I am ready for the final»

Karen Khachanov: «I made errors in the tie-break, it played a key role in the match against Karatsev»

Marin Cilic: «To reach another VTB Kremlin Cup final is a special moment for me»

Anett Kontaveit: «It’s going to be a tough battle with Alexandrova in the final»

The champions of the VTB Kremlin Cup in doubles Matwe Middelkoop and Harri Heliovaara spoke at a press-conference about how they managed to achieve success and assessed the chances to continue cooperation.

The first question is for Matwe. What happened at match-point, when the ball was on Cacic's racket and all he had to do was just to put it awa? How did you manage to win that rally?

Middelkoop: I can't even figure it out! Cacic played smart, did everything right, I had already given up and thought it was over. But somehow my partner decided to take the race of the lifetime! And he hurt his knee. He retrieved the ball, forced Cacic to play the volley, and he missed it. At that moment I realized that we will win. I have enough experience to make such conclusions. But I am already 38 years old, and I have never seen such a point as this one!

Heliovaara: It's bleeding! But we play for such points, the fans love such moments.

You played so well at this tournament. Are there any plans to continue cooperation in 2022?

M: This is a good question, but difficult at the same time. Because we have a different rankings, we play different events and we cannot get to the biggest tournaments together. But on the other hand, I like playing with Harri, he is a good fighter, young and fresh, ready to learn. The point is that he has his doubles partner, I have mine. But we need to keep in mind the opportunity to play together again, to leave that opportunity open. Our game is suitable for playing with each other, as you may have seen in this tournament.

X: I have nothing to add, Matwe said everything. It was an honor for me to play with him and I think that in the future we can repeat it. But as Matwe said, we have current doubles partners, so we can only keep in mind the possibility of playing together again in the future.

Matwe, you already have a tradition of winning in Russia, you won in St. Petersburg and Moscow. You played with Wesley Koolhof for a long time, then the partners began to change. How does the change of partners affect the results?

M: It is a difficult question. I started with Koolhof, we played together for three years, it turned out productively, we rose from the 300th in rankings to the Top 50. Then I played with Haase for a year, then with Demoliner for a year, and now I'm playing with Arevalo. I mean, it's not like I have too many partners. But yes, you're right, it's better to play with the same partner, because you can improve the game and rise in the rankings. But to do this, you need to play for three, four or five years, and this is not always possible. I have three or four years of my career left, so it would be a wise decision for me to find a permanent doubles partner and play with him, assemble a team, hire a coach and be as productive as possible.

Who supports you in Finland, Harri?

H: I think the biggest fan is my 5-month-old daughter, who was born in May and my wife. I can't wait to see them and hug them. They're at home in Helsinki waiting for me.

Why don't you go back to the court in Moscow and play together again to defend this title?

H: Well, of course, we would be happy if this option is available for us.

You have the prize money and the trophy, where are you going to celebrate?

M: It's a difficult question, because my partner needs to catch a plane, and I need to catch a train to St. Petersburg (to play in St. Petersburg Open 2021). But I know that there are a lot of good restaurants and bars there, so I will definitely go to one of them. 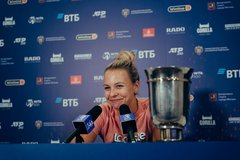